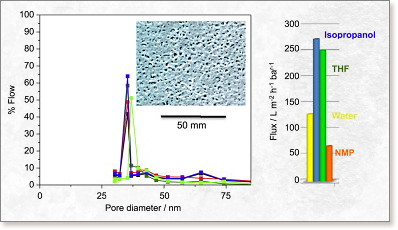 A series of polyoxadiazoles with exceptionally high stability at temperatures as high as 370 °C and in oxidative medium has been synthesized by polycondensation and manufactured into porous membranes by phase inversion. The membranes were characterized by thermal analysis (TGA), chemical stability was measured by immersion test, oxidative stability by Fenton's test, pore diameter by porosimetry and the morphology by FESEM. The polymers are soluble only in sulfuric acid and are stable in organic solvents like NMP, THF and isopropanol. The membranes selectivity was confirmed by separation of polystyrene standards with different molecular weights. Most membranes were characterized as having a cut-off of 60,000 g/mol. Being stable under harsh environments, the membranes have incomparable characteristics with perspectives of application in chemical and pharmaceutical industry, catalytic reactors, in combination with oxidative processes and other applications so far envisioned only for ceramic membranes.